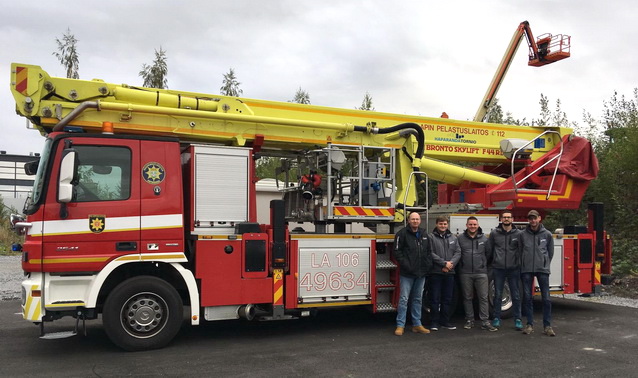 As part of the focus training of our lift manager service technicians, four technicians were again for a week of further training at the BRONTO plant in Finland – see photo.
This means that six technicians in Germany are now state of the art, including the so-called blue calibration key, which contains the latest B5 + control.
Up to three fire brigade BRONTOs were at the same time for repairs and 10-year checks in one of our workshops, such as the last one in Jänkendorf, the devices from Salzbergen, Neustadt / Dosse and from Klasterec / Czech Republic – see photo.
In the Czech Republic and Slovakia, some Bronto industrial devices from energy suppliers are also in the service support of Rothlehner.
In Austria, a new workshop in Villach will soon offer the opportunity to further expand the Bronto service in Austria. The service technician on site, also equipped with a blue key,
has been carrying out repairs and annual maintenance for fire departments in Austria for years including in South Tyrol or Bosnia. Operator training at fire departments, such as recently in Weiz / Styria, is also part of the program.

Three fire brigade BRONTOs at the same time in Jänkendorf